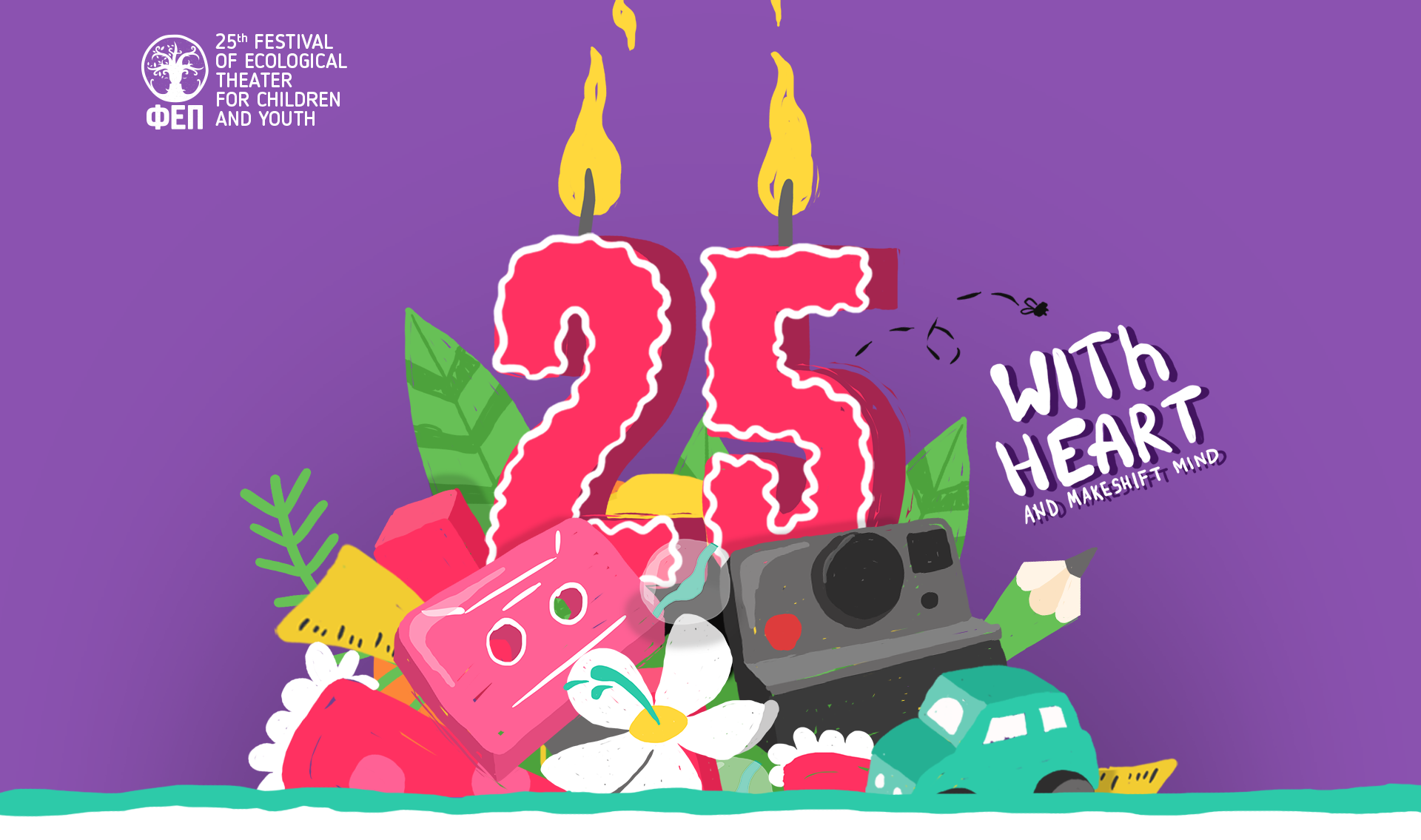 CALL FOR APPLICATIONS for participation in

the 25th FESTIVAL OF ECOLOGICAL THEATER FOR CHILDREN AND YOUTH

“With heart and makeshift mind”

“The Festival of Ecological Theater for Children and Youth” is open for applications for plays that will be part of our 25th Festival, which will take place from 22nd to 25th August in Bačka Palanka. Applications are open to all professional theater troupes that perform plays for children and youth.

Complete the application form. (click on the LINK to complete your online application)
All entries must be submitted no later than December 31, 2018!
Incomplete applications or applications submitted after the stated deadline will not be considered. All applicants will be informed about the submission approval, no longer than 10 days after receiving your application. You will be notified about your application status, and continuation of the selection process. Supporting documentation/material will not be returned but will be kept in the Festival’s archives, used only for the purposes of selection and promotion of the Festival’s program (program book, posters, website, social networks, and promo video). If you have any trouble with our online application form or any additional questions, feel free to contact us at – office@fep.org.rs

СSelection process begins with an analysis of the received applications. The Festival Selector will review the submissions, after what they will decide the time and place for showing the plays, all in cooperation with applicants.
After having seen all of the plays, the Selector will choose 5 to 10 plays that will take part in the competing program of 25th Festival of Ecological Theater for Children and Youth.
The main criteria for initial selection is the artistic quality, as well as technical requirements of the play (link to the festival’s scene layout). Quality of submitted plays, as well as possibility for conducting them, shall be assessed by the Festival’s selector, playwright TIJANA GRUMIĆ.
All parties will be informed by e-mail about the preliminary results of the selection no later than 31st January 2019, and the final results will be announced on Festival’s website (www.fep.org.rs) no later than 1st March 2019.

The award given by the professional jury is decided on by a three-person panel consisting of:
- Renown theatrical artists,
- Pedagogues (specially awarded and known for their work with children)
- Ecologists, protectors of environment
Names of the professional panelists shall be announced additionally.

The children’s jury award is decided on by a panel of seven children, aged 4-14, with a specific affinity for the theatrical arts. Mentor of the children’s jury is a teacher.
The audience award is decided by grading of each play on a scale of 1 to 5, as well as on an emotions scale for those younger that the age of 5.
The award for exceptional contribution to artistry for children and youth is decided by the Festival’s Council and Artistic Committee.

In accordance with the possibilities of the Festival organizers, travel expenses to Bačka Palanka and back are covered by the participants, while the expenses of local transport, accommodation, food and technical support are covered by the Festival organizers.
Festival of Ecological Theater for Children and Youth is a non-profit organization of humanitarian character, so therefore entrance to all events is free of charge and available to everyone.

Creating a theater festival in a city that doesn’t even have a theater, and more importantly – keeping it alive for 25 years, is a great reason to celebrate. In the past 24 years, FEP frequently had to adapt, change, fight for its space, grow, and develop in various ways in order to survive. And it succeeded -- it is still alive, and every year it’s bringing the magic of theater and smiles to faces of its visitors. Although FEP still doesn’t have a tangible theater to use as an anchor for its program, it teaches its audience a valuable lesson: Theater isn’t defined by a stage, curtain, or a reflector; it’s defined by the understanding between the performer and the audience. If nothing else, FEP always nurtured that understanding, and that’s exactly why it survived for so long. Continuing that tradition, for our jubilee 25th installment of FEP, understanding is precisely what we expect from our creators and performers. And don’t forget – even when we’re creating in a makeshift manner, we should always strive to create with our hearts: emotions are the universal language that never fails to deliver the message.
Tijana Grumić, playwright 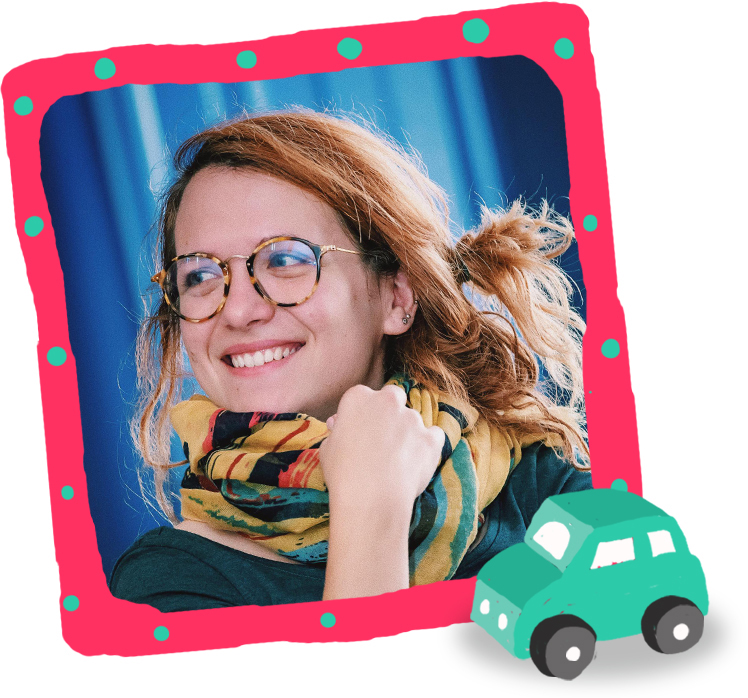 Tijana Grumić was born on September 13th 1993 in Novi Sad and grew up in Stara Pazova. She graduated in 2016 from the Faculty of Dramatic Arts in Belgrade as the best student of generation. In 2017, she finished master studies of dramaturgy at the same faculty, and she’s currently a student of doctoral art studies. She began her professional engagement during her undergraduate studies and by now she worked on several theatrical projects as a dramaturg, playwright and the director’s assistant in theatres around Serbia. Tijana’s plays were performed in the DADOV youth theater in Belgrade, on the scene of UK Vuk Karadžić, the “Bora Stanković Theatre” in Vranje, the Serbian National Theatre in Novi Sad, The City Theatre of Čačak. As a dramaturg, she worked in the National Theatre in Belgrade, National Theater in Sombor and the Youth Theater in Novi Sad. A play based on Tijana's script "Kepler 452-b" was selected to compete at the 63rd Sterijino Pozorje in Novi Sad, as well as at the Festival of Serbian Professional Theatres "Joakim Vujic", where Jug Djordjevic, the director, and Tijana Grumic shared a special award. For the same script, she also received the award for the best contemporary drama script at the festival Akter Evrope in Prespa (Macedonia). Tijana received a reward Josip Kulundžić (school year of 2014/15), which is granted by the Chair for dramaturgy at The Faculty of Dramatic Arts. Her drama The Creation of Man was declared as top five contemporary and engaged drama texts at the Heartefact fund competition in 2016, while her text Power Rangers Don’t Cry was selected as top five contemporary texts at the competition of Sterijino Pozorje in 2018. Tijana has also received the award "Borislav Mihajlovic Mihiz" in 2018, given by the Serbian reading room in Irig and "Borislav Mihajlovic Mihiz" foundation for the theatrical artistry in entirety. As a representative of FDU, she participated in an international project Terre Promesse which was organized by Civica Scuola di Teatro Paolo Grassi in Milan (Italy), and this year she was elected as one of the twelve participants of a residential program Next Generation Workspace which is organized as a part of the festival for children’s and youth theatre Starcke Stuecke in Frankfurt (Germany). Besides working in the theater, Tijana has been working at Petnica Science Center as the head of seminar for social sciences and humanities. She lives and works in Belgrade.